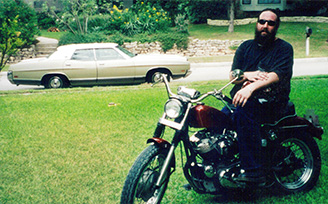 A rare interpreter who speaks both tech and layperson languages, an expert in presentation-layer web coding, Chris McDermott watches evolving technologies, manages Firecat’s IT infrastructure, and sets and maintains coding standards for the team. He also ensures that all pages display correctly in targeted browsers while maintaining optimal backward compatibility. He oversees WCAG and Section 508 web accessibility audits and selects and customizes applications for client projects.

Chris was tapped to lead USAA’s intranet efforts in 1994. He invented what we now recognize as a social media environment for employees in 1997, an interactive directory that encouraged personalization, sharing and expression. As a combination user interface designer, analyst and producer, he participated in the selection, installation, customization and deployment of enterprise portal content management applications.

In 2004, Chris co-founded and operated the interactive agency MediaRich with Susan Price and Mandi Harrell Leman, and has been a key contributor to Firecat Studio since its inception in 2008.

Chris has the technical understanding needed to code, but he’s a talented generalist with experience as a user-centered interaction designer, web producer and business analyst. He’s able to anticipate problems and steer projects around them. Efficiency and accuracy are hallmarks of Chris’s working style; he builds templates with his time-tested methodology to streamline production and simplify maintenance. He tackles problems with single-minded determination and focus. Chris is an experienced trainer and communicator skilled at explaining the intricacies of technical implementation and their implications to nontechnical team members. Firecat clients appreciate Chris’s tireless and patient attitude when chasing down details and providing excellent customer support.

Chris has a B.S. degree in Computer Science from the University of Texas at San Antonio. A native of the Alamo city, Chris enjoys spending time on ranches, driving in his series of classic cars, and traveling. His furry black cat helps him when he works from his home office.